Earthing: The Most Important Health Discovery Ever? Part 5

Earthing: The Most Important Health Discovery Ever?
by: Stephen Sinatra, M.D., F.A.C.C.

Thinner Blood with Better Flow
In the fall of 2008, I invited a group of colleagues to my home to participate in an unusual experiment.  The experiment involved taking a drop of blood before and after forty minutes of grounding from the twelve of us present - doctors, medical researchers, nurses, an attorney, two artists, a personal trainer, and Clint Ober.

We were grounded while sitting in a chair with our bare feet resting on conductive floor pads that Clint had connected with a wire to outside ground rods. Right after the session, our unstained blood samples were examined under a darkfield microscope, a device used by many doctors particularly in the field of alternative medicine.

The microscope diverts light through the optical system so that details appear light against a dark background. This technique allows viewing of "live time" cellular dynamics and conditions of blood not normally analyzed through routine tests.

The after-grounding pictures showed that our blood had dramatically changed in just over a half-hour of being grounded. Specifically, there were considerably fewer blood cell formations associated with clumping and clotting. The blood appeared to be considerably thinner.  The pictures below tell the story. 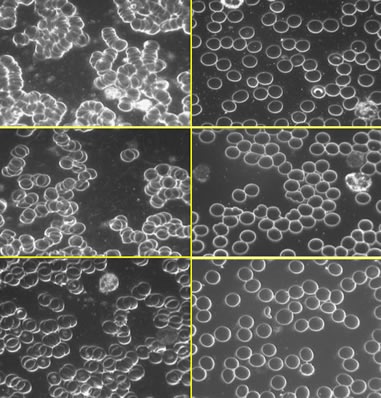 The reproductions above represent darkfield microscope images of blood taken from three individuals in attendance at Dr. Sinatra's house just before and after forty minutes of grounding.  The before image is on the left side, the after on the right.  The pictures clearly show a dramatic thinning out of blood cells.

All of us present in my home, with the exception of one person, had various degrees of sludgy blood before Earthing. The sole exception, the one with the best blood of anyone present, before or after grounding, was Clint Ober - someone who has been consistently Earthing himself everyday for years!

To all of us the results clearly suggested that individuals with inflammatory thick blood (typical in heart disease and diabetes) may reap huge benefits from Earthing on a regular basis. From a cardiology standpoint, if you can thin the typical thick blood of heart patients and people with diabetes in the direction of the consistency of wine you remove a big risk factor for heart attack and stroke.

Cardiologists use the term viscosity to describe blood thickness. Blood viscosity, an overlooked element in blood tests, has become an emerging marker for identifying the risk of arterial disease. The thicker your blood, the slower it flows through your circulatory system to bring oxygen and vital nutrients to the cells of your body, and the greater the risk of forming clots.

The experiment at home inspired a controlled study in 2009 to investigate whether Earthing can indeed influence red blood cell clumping and blood flow. To do this, we measured something called zeta potential, an unfamiliar term for most people, even doctors, that relates to the electrodynamics of blood and specifically the degree of negative charge on the surface of a red blood cell.

We selected ten individuals for the study. They sat comfortably in a reclining chair and were grounded for two hours. Grounded electrode patches were placed on their feet and hands just as had been done in previous studies. Blood samples were taken before and after two hours of continual Earthing.

Analysis of the blood showed a significant improvement of the average zeta potential from a rather depressed level to a very healthy level.  Blood low in zeta potential is more apt to be sludgy and thick, flow less freely, and have a greater risk of clumping and clotting. By comparison, a higher zeta potential translates to a higher negative charge of red blood cells. That means they repel each other more readily and flow smoother.

Earthing, our initial study indicated, apparently alters and normalizes blood voltage rapidly, improving the zeta potential and viscosity. We documented our findings and submitted it to a cardiovascular journal. Due scientific diligence must be done in the form of additional and careful study, so I can't say much more at this point other than that the results are extremely promising.

After the study, I came across some fascinating research in a 2008 article published in the international journal Biochimica et Biophysica Acta that reported, for the first time, on the zeta potential of red blood cells in diabetics. Researchers from the University of Calcutta described a "remarkable" and progressive deterioration in the zeta potential of red blood cells among diabetics and, at the worst, among diabetics with cardiovascular disease.

Their research revealed a parallel between poorer zeta potential and hypercoagulability. "Blood becomes sludge so that it becomes increasingly difficult for the heart to pump, and the system becomes less efficient to perform the usual functions affecting macro and microcirculation," they said. If Earthing indeed affects blood as we have seen, that means connecting with the Earth offers a great potential for not just heart patients and diabetics, but for people with all kinds of health problems. And even healthy people such as athletes.

The most dramatic test of Earthing's effectiveness was demonstrated by victorious American-sponsored cycling teams at the Tour de France. In the 2003 to 2005 races, and again in 2007, team cyclists were grounded after every day of competition. They reported better sleep, significantly less illness, practically no tendonitis, dramatic recovery from the day's racing, and faster healing of injuries.

Earthing has now been found to be so beneficial that many top athletes - including swimmers, NFL football players, triathletes, and motorcycle racers - routinely ground themselves.

Earthing affects the metabolism of the entire body at the cellular level. Our hypothesis, which becomes more obvious with every study, indicates that grounded individuals have a different, hardier, and healthier physiology than ungrounded individuals. As more research rolls out, we may find that we need to rewrite physiology books!

For all of the fascinating details, I encourage you to read my book Earthing:The Most Important Health Discovery Ever? that I wrote with Clint Ober and health writer Martin Zucker.  It's my opinion that whoever reads this book will never look at the ground beneath their feet the same way.

Now retired, Dr. Sinatra lectures widely on the metabolic approach to cardiovascular disease and electromedicine. His latest book is Earthing:The Most Important Health Discovery Ever? In it, he introduces the fascinating discovery of major health benefits resulting from direct physical contact with the Earth's natural, subtle electric energies.

Note:
Complimentary Earthing books and products were provided for evaluation purposes for a Q and A with Dr Sinatra on Earthing.